Three State reports have been reviewed since Germany ratified the Convention on the Rights of the Child in 1992, most recently a combined 3rd and 4th report in January 2014. Initial reports on the 1st and 2nd Optional Protocols have also been submitted and reviewed. In their Concluding Observations on each report, the experts on the UN Committee identified issues with the implementation of the UN CRC in Germany, suggested improvements, identified criticisms and made recommendations. These recommendations have far-reaching implications for implementing the UN CRC in Germany. The German government, federal Länder and local authorities were and continue to be called on to do their duty in implementing the UN CRC within their respective areas of responsibility.

The documents relating to the latest State reports for the Federal Republic of Germany can be found below. You can find documents on completed procedures in the Archive of the State reporting cycle in Germany, which also holds German-language versions or translations of the documents insofar as these are available to us.

Information on the State reporting cycle available in German

To make the UN Committee’s working methods and the reporting obligations under Article 44 of the UN CRC easier to understand and more widely known, the National CRC Monitoring Mechanism at the German Institute for Human Rights has produced written information and an explanatory video on the reporting procedure (in the column on the right-hand side), both of which describe the process and illustrate the reporting cycle. In particular, the written information references more in-depth documentation and further details and explains how civil society organisations and children’s self-organisations can participate in the procedure.

Judith Feige (2017): Kinderrechte in Deutschland unter der Lupe. Das Berichtsverfahren zur Umsetzung der UN-Kinderrechtskonvention (Children’s rights in Germany under the microscope. The reporting procedure for implementing the UN Convention on the Rights of the Child)

The combined Fifth and Sixth State Reports of the Federal Republic of Germany on the Convention on the Rights of the Child were presented to the Federal Cabinet on 13 February 2019 by Federal Family Minister Dr Franziska Giffey. The Cabinet adopted the reports, which furnishes information’s on the key developments in strengthening children’s rights in Germany since 2014. The German government officially submitted the reports to the United Nations in Geneva on 4 April 2019. A child-friendly version of the report on the UN CRC was published at the same time.

The onset of the coronavirus pandemic was accompanied by significant setbacks in the realisation of the rights of the child in Germany; the initial failure to consider the opinions and views of children and young people under… 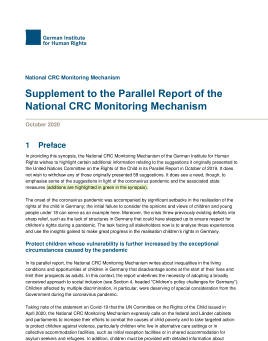 Infographic on the State reporting cycle

The eight phases of the State reporting procedure for the UN CRC are illustrated in the chart below, which you are welcome to use for presentations, lectures or seminars. It can be downloaded here as barrier-free PDF

The State Reporting Cycle to the UN Committee on the Rights of the Child (PDF, 56,3 KB)

The phases of the State reporting cycle